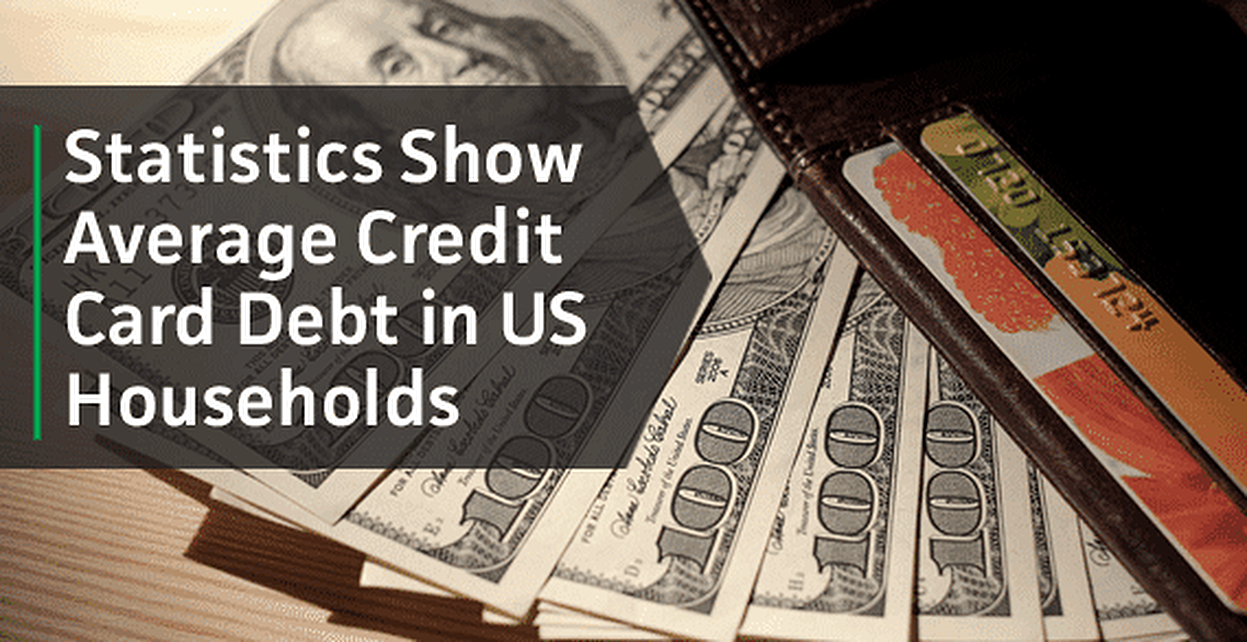 Already approaching 7.5 billion halfway through 2017, the world population is projected to top the 8 billion mark around 2023. In the US alone, a new American is born about every eight seconds, constantly adding to a population well above 325 million.

Yet, despite being surrounded by literally millions of other people, it can be remarkably easy to feel completely alone, especially when dealing with a difficult situation. For instance, almost 80% of Americans have a credit card, more than half of whom carry a balance on their cards. But for those struggling with a balance that’s gotten out of control, it can feel like you’re the only one.

Well, according to the data, no one is alone — not so far as credit card debt is concerned, at least. The latest statistics released from the Center for Microeconomic Data for the Federal Reserve Bank of New York show that total US credit card debt hit $764 billion in the first quarter of 2017.

While this is $15 billion less than Q4 of 2016, it represents around a 7% increase year over year, and a 13% increase from the post-recession low of $660 billion. That said, the overall numbers are still a far cry from the $870 billion total credit card debt hit during the Great Recession. 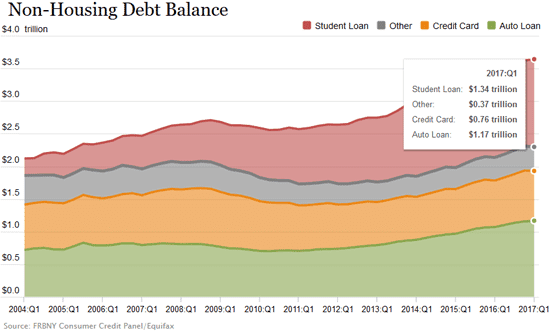 However, despite the overall increase in credit card debt over the last several years, delinquency rates remain near their lowest levels in decades with credit card delinquency at 2.42%. Credit card charge-offs also remain at historically low levels, coming in at 3.6% for Q1 of 2017.

And non-housing debt pales in comparison to what Americans owe on their mortgages. In the first quarter of 2017, housing debt topped $9 trillion for the first time in a decade, reaching pre-recession heights not seen since 2007. Overall, household debt stood at a whopping $12.73 trillion as of March 31, 2017.

While the national numbers give an indication of the general state of financial affairs in the country as a whole, they likely need more context to be useful to the typical consumer. In particular, these statistics can be much more useful when analyzed in terms of the debt held by the average household, rather than the country as a whole.

Another way to analyze the credit card debt statistics is to look at how the numbers stack up for those who are actually carrying all that debt. Of the 126 million US households, about 38% — or 48 million — of households maintain a credit card balance from month to month. 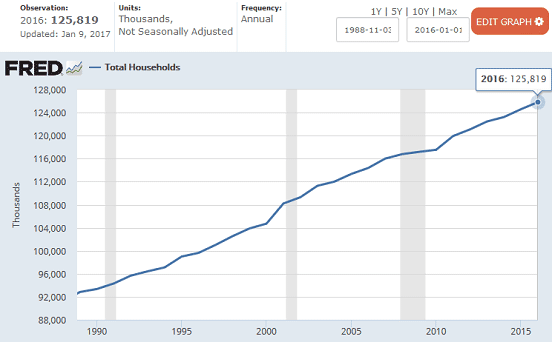 FRED data shows the US had approximately 126 million households at the start of 2017.

Doing the math, that means each household with credit card debt has an average balance of $15,917. With most card-carrying consumers averaging 2.6 credit cards apiece, the typical individual credit card balance — among those who carry a balance — is around $6,122 per card.

Additionally, considering the average credit card APR of 16.6%, households with the typical $15,917 in credit card debt will see a nominal cost of $2,642 a year in interest fees. For those stuck paying a higher subprime rate — or, worse, the 29.99% often charged as a penalty rate — that number could skyrocket to over $4,750 a year in interest fees.

Although perhaps shocking to those who haven’t before heard their like, the  average credit card debt for US households in the first quarter of 2017 have varied only slightly over the previous few quarters. And, beyond being a way to see how your own debt falls on the credit card spectrum, few of those statistics are terribly enlightening.

Indeed, it’s often not until you break down those statistics that the truly interesting data comes to light. For instance, while women are often stereotyped as spending more money, a ValuePenguin report found it’s actually men who carry the most credit card debt — 22% more. Others trends in the data suggest things like income, age, and region can play a role in average credit card debt, as well.

In fact, according to the ValuePenguin report, households with a net worth of $500,000 and up have an average credit card debt of $8,139, just $2,168 less than the most indebted group. When looking at individuals, average card debt actually increases with income, and a separate NerdWallet study found that households with the most income also tend to pay the most credit card interest, averaging $2,515 a year.

In addition to income, it turns out that age may also be a factor influencing how much credit card debt we carry. The same ValuePenguin study discovered that consumers aged 35 to 64 carry an average of 27% more credit card debt than those older or younger, whether due to that period being the prime earning years for many, or simply the period in which many undergo the expensive process of raising children.

According to data from ValuePengiun, average credit card debt increases with income.

Another interesting breakdown of the credit card statistics comes when they’re analyzed by region, as it turns out that location may have some impact on your debt levels. In particular, both the ValuePenguin report and analysis by Bankrate found that residents of Alaska held the largest credit card debts, while the people of Iowa held the least amount of credit card debt, with average debts of $7,706 and $4,734, respectively. 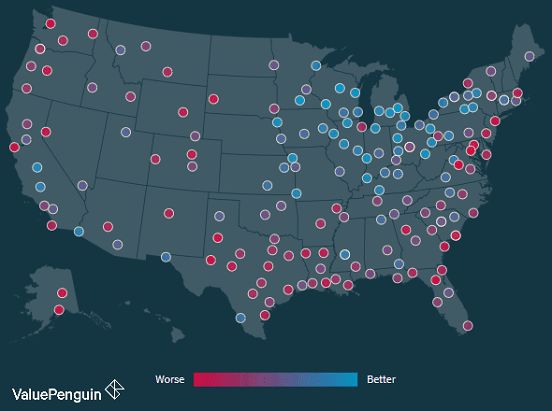 This map shows the average credit card debt for various regions across the country.

In general, areas with the highest cost of living tended to have the highest debt, with New York, Connecticut, Virginia, and Colorado all topping the list. States typically considered to be mainly rural, including North and South Dakota, Maine, and Nebraska, all fell at the bottom of the list. Surprising to some, a few states associated with high-cost-of-living cities, such as California and Massachusetts, actually fell in the middle of the pack.

Despite being surrounded by literally billions of people, it’s still easy to feel alone in some of our most trying situations, including the battle with credit card debt. As the statistics clearly show, however, no one is facing it alone. Millions of Americans carry credit card debt, regardless of wealth, income, age, or even region.

But they won’t always be. Whether on their own or with help, perhaps from an experienced debt relief program, Americans are making their way out of debt.

Furthermore, while year-over-year credit card debt has increased 7% as population and spending rises, levels still remain well below — more than $100 billion below — the heights reached during the financial crisis of the 2000s.

Brittney Mayer
Brittney Mayer is a credit strategist and contributing editor for www.engraphicy.com, where she uses her extensive research background to write comprehensive consumer guides aimed at helping readers make educated financial decisions on the path to building better credit. Leveraging her vast knowledge of the financial industry, Brittney’s work can be found on a variety of websites, including the National Foundation for Credit Counseling, US News & World Report, NBC News,TheSimpleDollar.com, CreditRepair.com, Lexington Law, CardRates.com, and CreditCards.com, among others.
1.8k followers
6.5k followers
◄ 1 of 5 ► 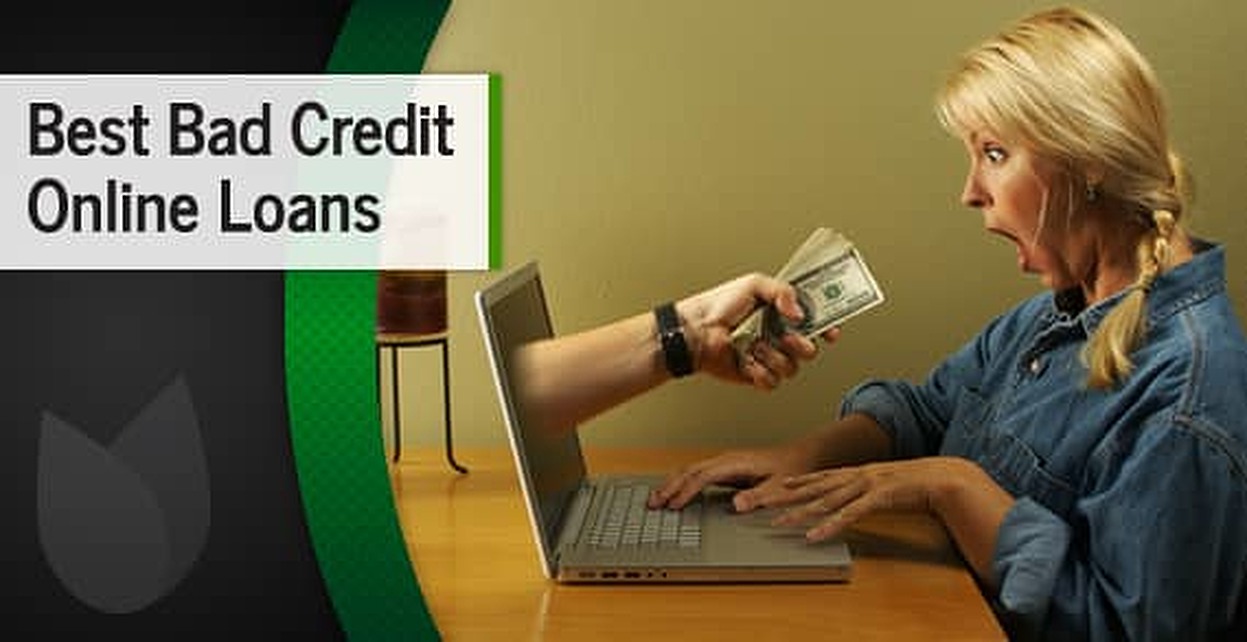 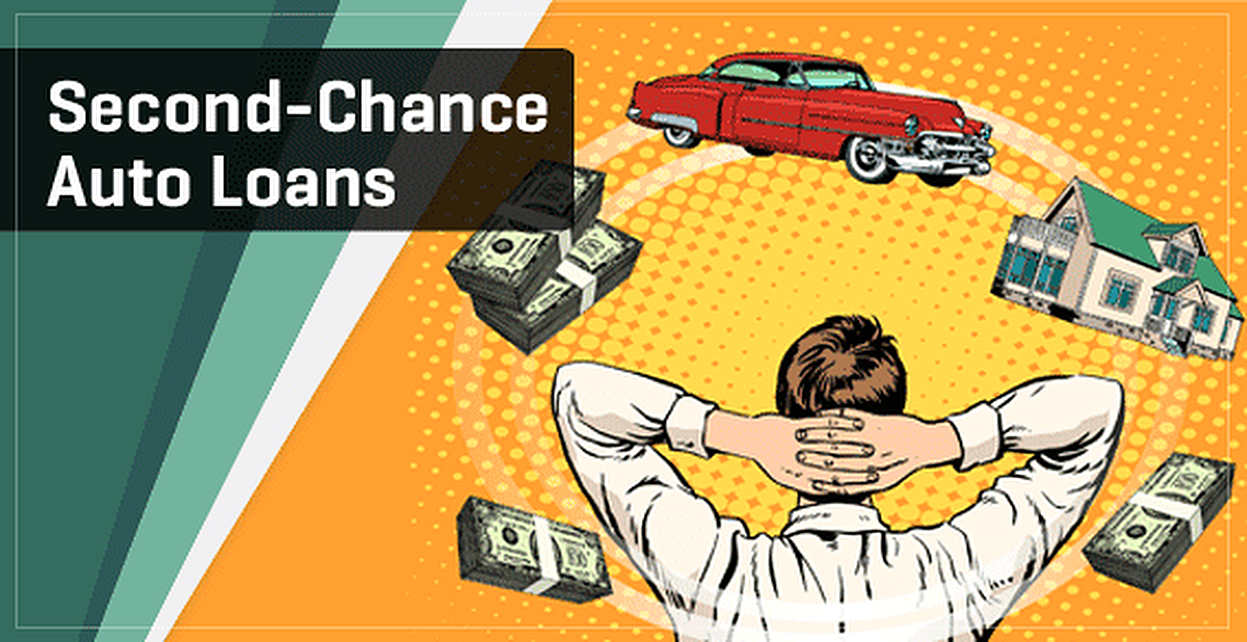 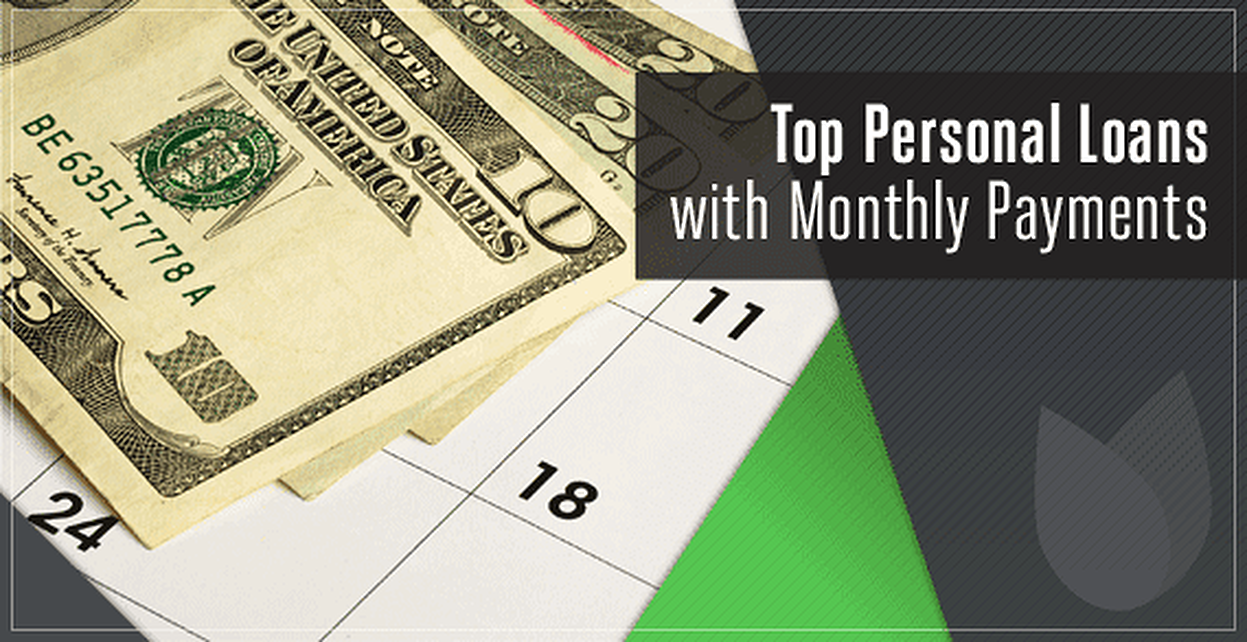 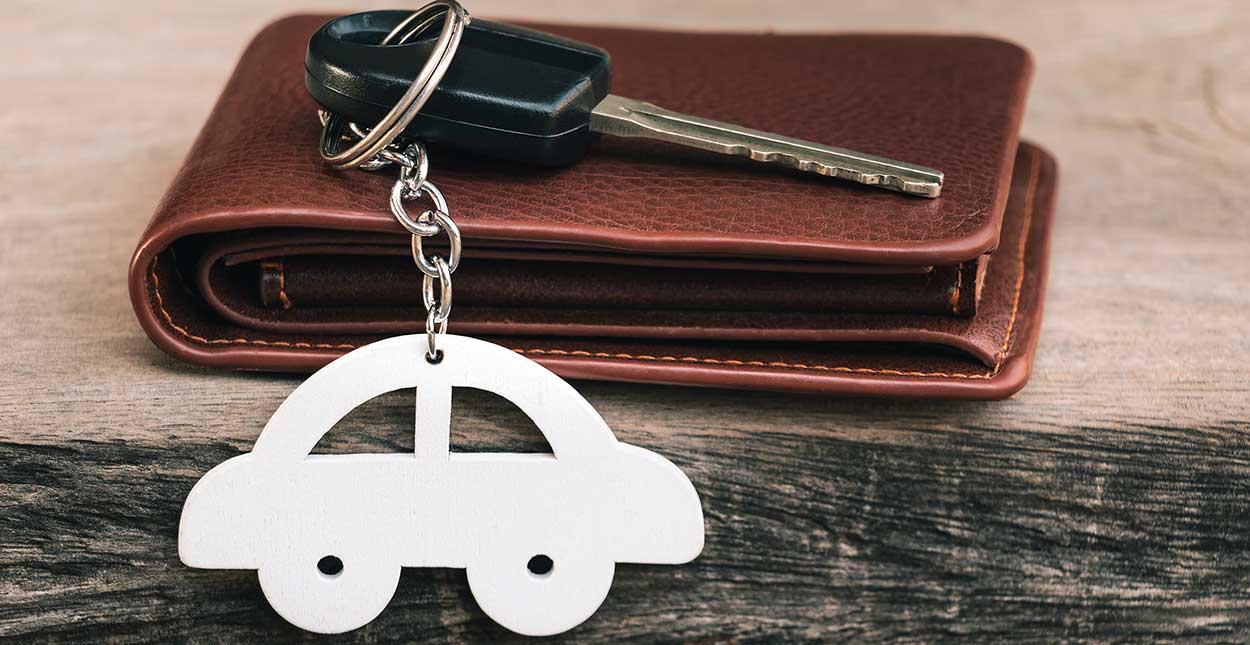 8 Loans for People with Bad Credit & No Bank Acco

2 Simple Steps to Open a Bank Account Online with